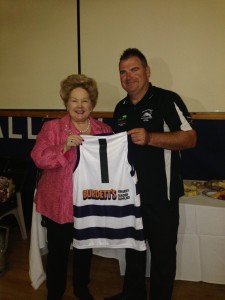 On Friday March 21, Sue Alberti and Colin North were delighted to be special guests of the Pearcedale Football Netball Club’s Phoenix Club. The coterie group was established several seasons ago after problems on an end of season football trip. Sue was key note speaker on the night and spoke passionately about the difference well run sporting organisations can play in the lives of their members and the wider community, as well as anecdotes from her life. She donated a special Western Bulldogs Matthew Boyd football jumper which was the major prize for the raffle draw. “I am looking forward to following the progress of the Pearcedale Football and Netball Clubs in 2013 almost as closely as the mighty dogs!” Sue said. “It’s a real credit to the members of the Phoenix Club that they have been able to rally around the football team and create a new culture that will drive them to future success.”

Susan was delighted to attend the recent 2022 Mona

Susan was honoured to attend the recent 2022 Carey